A .BSP file is a level in the Quake1 game and is run as follows:
Place the .BSP file in the Quake\Id1\Maps directory. Start the FULL version of Quake and go to the CONSOLE. If the level e.g. is called "CASTLE.BSP", then type "MAP CASTLE (return)" and Quake will start up your level, complete with monsters and all.

This is a moderately correct scale model of the Great Pyramid.
You'll see no monsters unless you do as follows: Start Quake, choose 'EASY SKILL', and type "MAP CHEOPS" on the console. Now the monsters appear.

Note: DOS games in full screen mode can't run on Vista/Windows7 or later.
There are some ways to attack this problem:
* The game may run under a DOS-emulator, fex. DosBox, which is free, now in version 0,74, obtainable on:
http://dosbox.sourceforge.net
Dosbox can make stubborn old games/programs run fast and error-free on Windows, Linux, MAC etc.
or:
* If you can get hold of an SDL version of the game, or something like that, it may run on
operating systems other than Windows9X.

For some years I have become involved with Wolfenstein3D. Here are the mods I have made so far:
They are in normal and SDL versions (All files are included).
In windows vista-10 you must play normal mods using dosbox.
The SDL versions are in zip format and not for MAC.
NOTE: The SDL bosses act a little differently. Play from Wolf4SDL.exe. 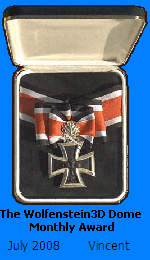 I found a very early version of Wolfenstein3D from when the game was half-finished.
Levels 7-9 could not be played, but I have fixed this with savegames. Available at The level maps can be viewed with fex. my VSMAPED program.
Saved games here 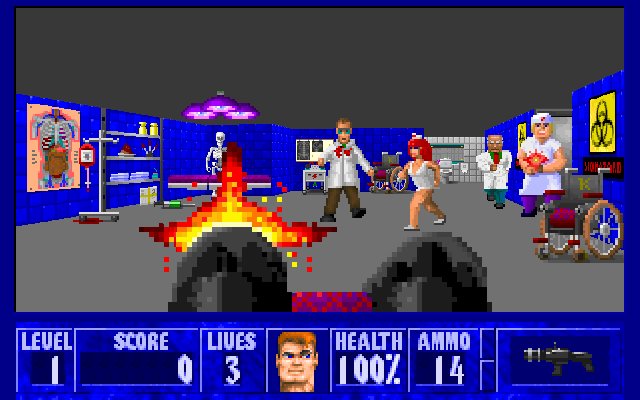 Here is update 2 of Krankenstein Hospital. I used VSWolfTools (available here) for making changes.
The blue tiles are back, plus white tiles in bathrooms, and some more wall images.
The persons look somewhat better now, and the machine gun is totally reworked.
4 imf music pieces have been replaced, nazi marches have no place in a hospital.
All levels were reviewed and the gameplay improved (harder now).
Two all new levels have appeared, 3: 'Deja Vu' and 39: 'Castle', and
levels 34: 'Krankenstad' and 35: 'Rush Hour' have been interchange<d.
Future updates will mainly be cosmetic, improving graphics or sounds, maintaining gameplay.

The really great game Duke Nukem 3D must be played in windows vista to 10 as follows:
Download and install eduke32 from the internet.
Copy duke3d.grp and duke.rts from your duke3d directory (full or shareware) to the eduke directory,
then you can play the (improved) game from eduke\eduke32.exe.